I came back with memories from Thailand and this time with my last vacation destination, Bangkok. There will be many pictures in this article. Many things have been written about Bangkok on the Internet; I myself read a dozen articles before arriving here, especially because it was the first time I was putting my foot in an Asian country, and I needed to know about it as much as possible to make my vacation as easy as possible.

If before our trip to Asia our island activity was quite outlined, when we planned the 4 days in Bangkok, things were a little bit terrible. I read a few nasty things that some tourists experienced from taxi drivers and those who were willing to do anything but fool you and make some profit from you. This information has helped me make some decisions I didn’t regret and which made me feel safe. We decided at home not to take taxis on the street, not to be attracted to the traps of tuk tuk drivers and not to be influenced by the benevolent locals who would have approached us in a polite manner on the street, proposing us excursions. 4 days were not enough to see at least some of the most important landmarks in town and surroundings. The distances between them were very long; we did not know how to organize them so that we could reach at least the best known ones.

That’s how it was that, before 6 weeks off, I contacted a local travel agency with authorized guides, about that I read that it is one of the most serious agencies in Bangkok and … I waited for an answer. I was on the verge of giving up and starting looking for another agency. After two weeks I received the answer. I later found out that they are very busy and it is a matter of luck whether you get or not an answer. We were lucky. We told them what we wanted to visit, they made our route, a price offer that we accepted in a blink of an eye, being very convenient, and… Bangkok adventure could begin.

I landed in Bangkok after an hour flight from Krabi. I took an authorized airport taxi, and in about 45 minutes I was at the Amora NeoLuxe Hotel. Here I had a new heat shock: as soon as I walked into the reception door and down the street again, I trembled with cold. Outside it was heat and humidity I didn’t feel on the island. There were huge differences between indoor and outdoor temperatures, whether this was a toilet or a train or a taxi. People here are crazy with air conditioning. Because we had an entire afternoon, on the first day we took the skytrain and left to meet the city. 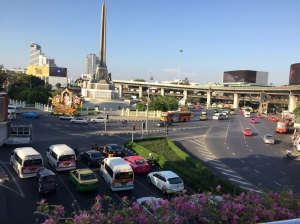 I finished the evening at the pool on the hotel roof. The pictures fail to say big things, the reality is overwhelming. 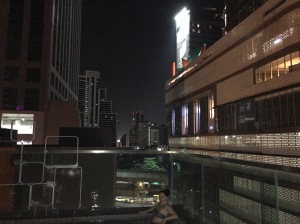 Good morning, Bangkok! Today we will meet you in an organized way. After a consistent breakfast, I went down to the hotel reception where I met Nina, a very fun tourist guide, who I spent with 2 days. This girl was very funny, she laughed and talked all the time. She can infect you with her joy.

We knew the route we were going to go through together in the two days while Nina was our guide (her real name was another one, which I forgot; she chose a name that is easy to remember by tourists and however, the accent with which she pronounced her name was different from ours). Finally, at the hotel’s staircase we were expected by a very beautiful car with a driver who opened the door whenever I went down or jumped into the car, overly polite, but very nice. He didn’t know a word in English, but it compensated by his polite behavior.

The first destination was Damnoen Saduak floating market. We have arrived here after 2 hours trip by car, the place is beautiful, it worths seeing, you can bargain for everything, and the fact that we were accompanied by a local guide helped us in obtaining very low prices. I bought saffron at a ridiculously low price of about 10 RON/100 g, as we know how expensive this product is on the Romanian market and Europe in general. We have negotiated some scarves, handmade handbags, fresh fruit – very good and sweet longan. We sailed on the canals and ate the best sticky rice (coconut and mango rice… mmm… delicious !!!!). 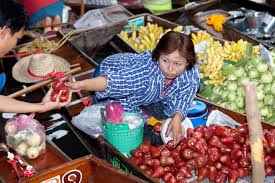 We went on this early trip to avoid the floating market crowd, but also to have time to do whatever we wanted for that day. Thus, the next destination was the Tiger Temple. I’m not taking any details because I do not agree with the conditions in which those animals are kept. I just want to tell you that the tigers were quite agitated. I waited about 5-10 minutes until the caregivers reassured them how much they agreed to be photographed. Poor them!!! I know that at the end of April they would be taken from the temple and taken to their natural environment. I don’t know if this happened and I don’t think they would have done a good thing, as they are used to be fed by people. However, there are different opinions, we didn’t necessarily want to get there, but the tourist package also included this location.

The last trip of that day was to the elephants. They are also aggressed and trained to do what the caregivers want. Unfortunately, I have no pictures of walking on the elephant due to a technical error. Again!!!! Anyway, after we fed a female with bananas, we walked with her for an hour. It was the second largest in Thailand, it was huge. We had two possibilities: simply to walk around a garden and on the shores of a river, or to bathe with the elephant, that is, the elephant threw us in the water and splashed us. My husband would have liked the second option, but of course I had the last word. Anyway, when I saw how big our elephant was, even a simple ride seemed impossible to accomplish, I hardly accepted to climb on its back. Interesting! Then I ate at a Thai restaurant recommended by Nina for good prices and for taste. Very good food!

In the evening, I thought I deserved a foot massage, especially because they were terrible painful, then a bath in the hotel pool and then a good sleep.

The next day we met Nina again, this time without a car and driver, because that day was for Bangkok. I don’t insist on details because I visited temples about which the internet abounds with all kinds of information and which any visitor who comes to Bangkok visits them (Buddha lying, golden Buddha, emerald Buddha, well … Buddha in general). I respect their faith, but for me it’s just a story and nothing more. I saw a very beautiful flower market, the Chinese quarter and we sailed a private boat on Bangkok’s canals. Here are the pictures: 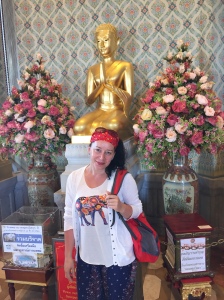 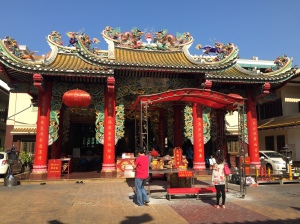 I saw beautiful flower decorations, some were made especially for being taken to temples or embelish the cars. 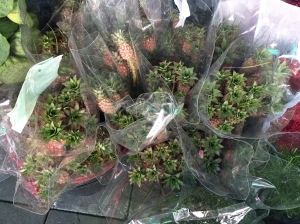 The king, who the Thai have a huge respect to, buys flower every year from here and Nina asked me to take this picture.

Aren’t the people in Thaildand full of joy? 🙂

Me and Nina, our guide 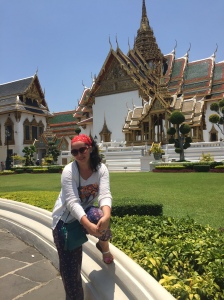 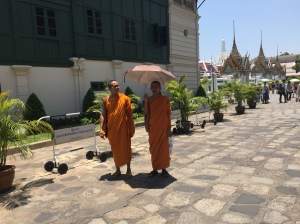 After visiting some temples, we rented a boat and sailed across the Chao Phraya River in Bangkok to see a less luxurious area of the city, where people live in hardly imagined conditions. 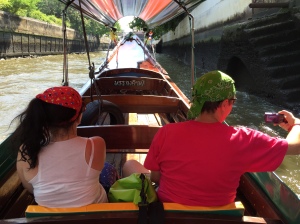 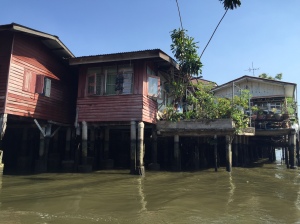 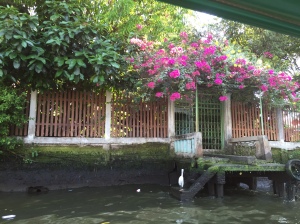 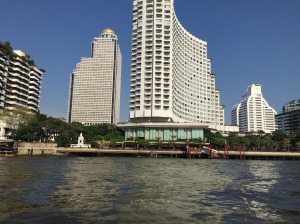 We ended this trip with the regret that we were saying good-bye to Nina and her contagious joy. Each visited place has a story that will remain in our heart, and Nina has told so many stories about the Thai people that I admired her power to see the beautiful part of everything. Because of her we found that the Thai people are optimistic, they believe strongly in their leaders, who they don’t pay tribute because they have to, but because the people love them and take gentle bows when talking about the royal family. I learned from her that it is not hard to say: thank you and if you say thank you while you smile, you can get the same answer, expressed in the same way, and the day can actually start beautifully.

In the evening I had a check-in point on my personal list, the Terminal 21 shopping mall, about which I was reading interesting things. It was really nice to see it. Each floor is designed as the copy of a famous city: 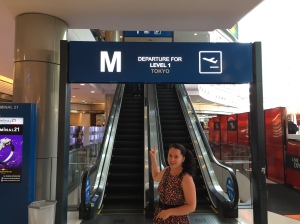 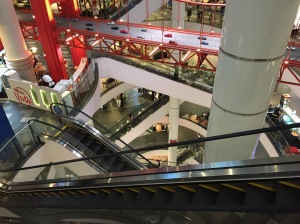 We spent the last day shopping, and in the evening we went to see the most beautiful sunset in Asiatique, a city district on the bank of the Chao Phraya river, particularly beautiful. 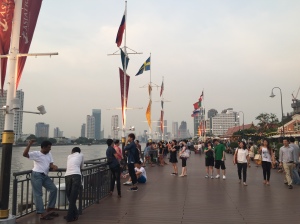 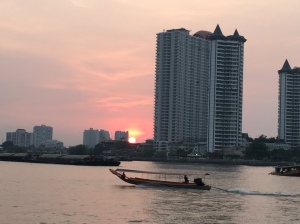 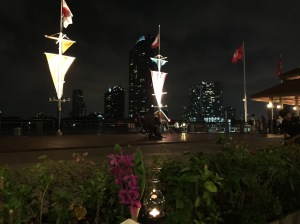 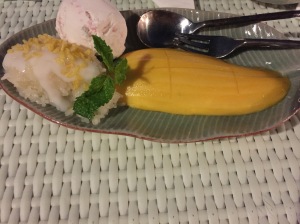 I’ve warned you from the beginning that there will be many pictures; I hope we didn’t get bored.

As a conclusion, I will return to Thailand in a few months. I don’t know if I’m going to stay in Bangkok, I liked the city, but I think Thailand has a lot to offer. I would love to talk to you in a future article about what I bought: local products, cosmetics and not many other. If you have any questions, I will answer them dearly.

This was my trip to Asia. Until next time, all the best!

Enjoy this blog? Please LIKE Us on Social Media!